This action will force synchronization from zieckey/evpp, which will overwrite any changes that you have made since you forked the repository, and can not be recovered!!!

Synchronous operation will process in the background and will refresh the page when finishing processing. Please be patient.

Boost.Asio is a cross-platform C++ library for network and low-level I/O programming that provides developers with a consistent asynchronous model using a modern C++ approach.

The benchmark test in benchmark_throughput_vs_asio.md used the fixed size message to do the ping-pong protocol benchmark.

This test we use the message whose length is increasing by 1 every time to test the ping pong protocol. Every message consists of a header and a body. The header is defined as bellow:

We have done a benchmark with following parameters

For details, please see the charts below. The horizontal axis is the number of thread count. The vertical axis is the time spent, the lower is the better. 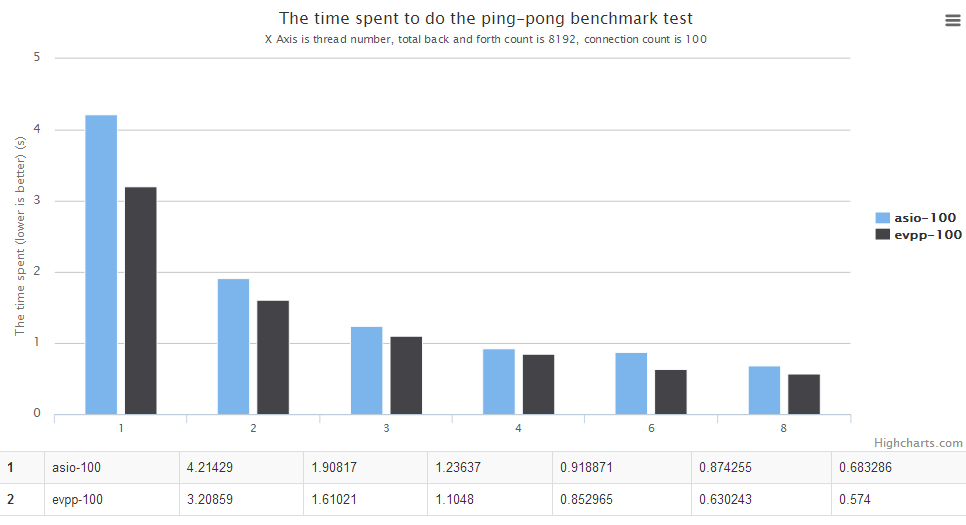 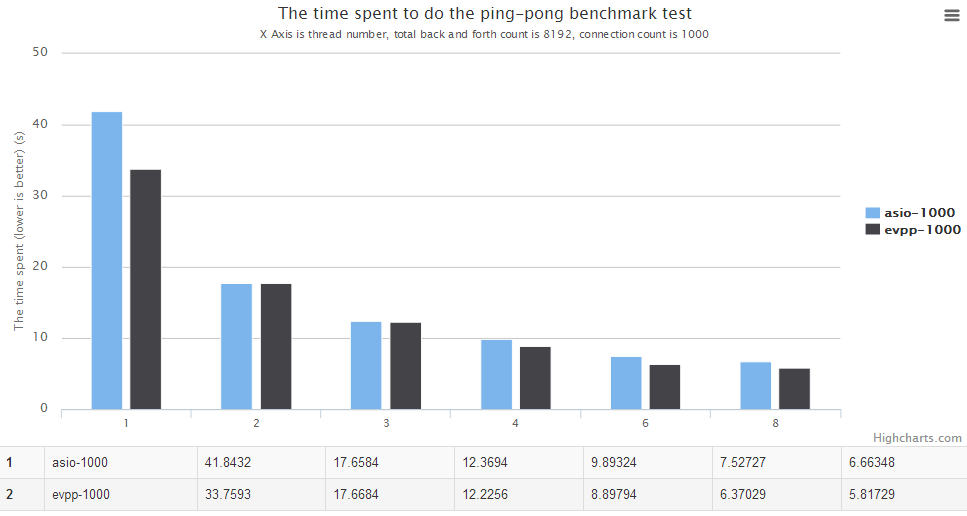 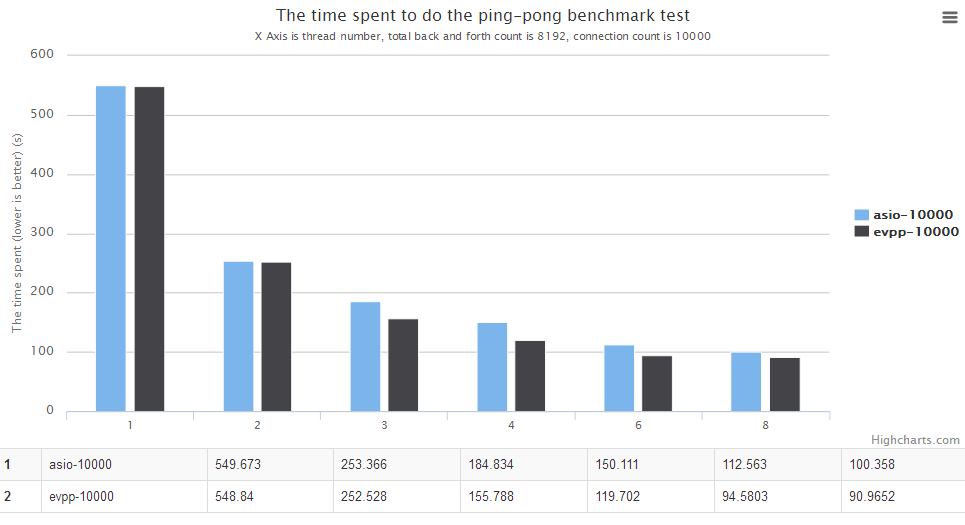 In this ping pong benchmark test, the asio's logic is :

This will do the recv system call twice at least for every single message.

In the mean time, evpp is reactor model, it will try to read data as much as possible, maybe it does the recv system call only one time for every single message. That's the key point why evpp is faster than asio in this scenario. And this scenario is the most common in the real world applications. So we can say evpp's performance is a little bit higher than asio, at least not bad to asio.

The IO Event performance benchmark against Boost.Asio : evpp is higher than asio about 20%~50% in this case

The ping-pong benchmark against Boost.Asio : evpp is higher than asio about 5%~20% in this case

The throughput benchmark against libevent2 : evpp is higher than libevent about 17%~130% in this case

The throughput benchmark against Boost.Asio : evpp and asio have the similar performance in this case

The throughput benchmark against Boost.Asio(中文) : evpp and asio have the similar performance in this case

The throughput benchmark against muduo(中文) : evpp and muduo have the similar performance in this case

The beautiful chart is rendered by gochart. Thanks for your reading this report. Please feel free to discuss with us for the benchmark test.

Report success
We will send you the feedback within 2 working days through the letter!
Please fill in the reason for the report carefully. Provide as detailed a description as possible.
Please select a report type
Cancel
Send
evpp是一个基于libevent开发的现代化C++11高性能网络服务器，自带TCP/UDP/HTTP等协议的异步非阻塞式的服务器和客户端库。 spread retract
https://github.com/Qihoo360/evpp
C++
BSD-3-Clause
Use BSD-3-Clause
Cancel
No release
load more
can not load any more